“A thankful heart is not only the greatest virtue, but the parent of all other virtues.” – Cicero 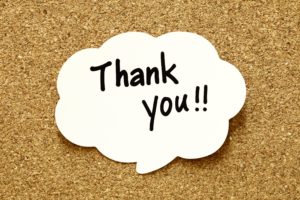 Are you saying “thank you” enough these days? Expressing appreciation to others can have a wonderful ripple effect. As others feel acknowledged and respected, it’s often paid forward to the next person they encounter, and so on. Saying “thanks” reveals we see ourselves as part of a larger community, where we recognize we’re all interconnected—and strengthening that web can make us all better for it.

What follows are five instances in our everyday lives we should be saying “thank you” and may not be. Give yourself a point for each one you do.

When you walk through a door being held open for you

Many people fail to even notice that they’re walking through an open door. They’re engaged in a conversation or their own thoughts or I-don’t-know-what. The door-holder, though, is making a real effort to be helpful to others and deserves a “thank you” each and every time.  Keep in mind they may have become trapped by a sudden swarm of people behind the mom with a stroller, but they didn’t let the door slam shut in front of you. They probably deserve an award.

When the car next to you lets you merge in front

We’ve all witnessed one specific gesture being used on the roadways, but there’s a better one we need to employ. It’s the universal handwave in front of the rearview mirror letting the driver behind you know that you appreciate them slowing down and giving you space. Don’t wave too soon, though. Make sure you’re exactly in front of them so your wiggling fingers are seen. I think we’d have less road-rage if we used more of the five-finger wave and less of the single-finger.

This holds true for anyone assisting your primary server (who also deserves a periodic “thank you”). These unsung heroes usually make less than the main servers, so saying “thank you” is especially appreciated. No one expects you to interrupt your conversation each and every time they appear. Just an occasional acknowledgement is called for.

When the grocery bagger is finished

The cashier deserves a “thank you”, of course, but the hardworking bagger has earned one, too. Be sure you make eye contact and thank them for taking good care of your eggs/cupcakes/bananas. For some, this is their first foray into the workforce. For others, this will be the only job they ever have. A little encouragement will mean a lot.

When the flight attendant hands you a drink

Here’s another stressful yet often thankless job. Yes, the engines are loud, your ears are plugged, your seatmate is hugging your armrest, and the person in front of you is fully-reclined, but make sure you at least mouth “thank you” to the attendant after they’ve served you. Placing our order for ginger ale comes easily; our thank you afterward doesn’t always.

“Appreciation is a wonderful thing. It makes what is excellent in others belong to us as well.” – Voltaire